Do you know about Decorate Ravensthorpe Ostara?

Eivor is assigned to decorate five locations for a festival in the ‘Let’s Get Festive’ side quest.

Decorate Ravensthorpe to complete Let’s Get Festive in AC Valhalla.

But the first step in this quest is to look at how to begin and what Eivor should do.

How to Start Let’s Get Festive 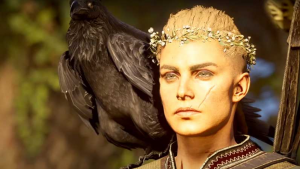 While the Ostara Festival is going on, speak with Norvid. In addition, he will discuss how to decorate the settlement for the festival.

In order to make Ravensthorpe more festive, he will need your help placing settlement decorations. That’s how you can get started with this side quest.

Ask him how to decorate while you’re talking to him. Or, Norvid will tell you everything you need to know.

How to Decorate Ravensthorpe

You can decorate items by following the markers. In case you need any further assistance finding the dragon heads or pedestals, use your Raven.

And get in touch with them. Also, the prompt “Decorative Element” will appear.

Because Settlement cosmetics aren’t that important, you can choose whichever one you want.

Once you have placed 5 Decorations, return to Norvid. Otherwise, get in touch with him. But you will receive 50 Festival Tokens as a reward.

As a result, the Let’s Get Festive quest in AC Valhalla will be completed.

Fix the Let’s Get Festive Bug in AC Valhalla

You might be able to add decoration to a particular location after a quick restart and save. However, if the bug persists in all locations, then it is a different story.

This issue has also been addressed by the developers of AC Valhalla. Since players reported a bug, we removed the Let’s Get Festive mission.

It’s not a new bug, so don’t worry if you don’t see the quest icon on the map in Ravensthorpe.

And from the developer’s perspective, only this mission has been removed.

It’s still possible to access the other missions even if you can’t access the decorative one. So, enjoy the game and have a great time.